We have converted our garage into a make shift spin studio affectionately called the Bike Torture Chamber or BTC for short.  We have four CompuTrainers (CTs), a Wahoo Fitness KICKR, and a Wahoo Fitness Snap.  We normally use PerfPro Studios as a means to provide our interactive training sessions.  This is normally done through their organic workouts or Sufferfest videos.  We have also 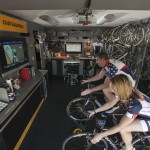 started using Zwift running it through an Alienware’sgaming box so we can have two athletes on Zwift Island at the same time.  While the end result – having a computer create trainer resistance based on some training profile is constant – the training experience across these different products varies.

DC Rainmaker provides an excellent product review of both the Wahoo options and the CompuTrainer.  We provide more information about the product experience – after many hours of sweating profusely and pedaling to nowhere in the BTC.
I bought my first CT in 2008 and within minutes had it connected to an old Dell laptop spinning to RacerMate’s original software.   As the first firm in the market, CT excelled at the actual product and, with little competition, did not have to develop quality software to accompany the trainer.  As electronics moved from wired to wireless, the CT still requires 120v plug and the computer.  Could you pack up the trainer and take it to a race to warm-up, nope not unless you dragged a Honda generator around with you.
Once I settled in DC, I got two buddies and my future wife to buy CompuTrainers, set them up in the garage, remodeled the garage, and the BTC was born.   We used RacerMate’s software and I dusted off old computer skills to code a program to sync with a Sufferfest video.  Setup was again with the software the weak part.
Then I found PerfPro, which opened up a different experience and helped the BTC earn that second word, torture!  Now we had a platform that worked great for us.  Then Drew (PerfPro) integrated Sufferfest videos and the four of us could ride to Revolver or Angels or Hell Hath No Fury.  Friday nights became Bad 80s Movies night on Netflix, the winter went by much faster.
The next item that came out was the Wahoo Fitness KICKR.  The appeal of this was that you could remove the rear wheel and it attached to the trainer, eliminating wear and tear of the wheel – especially if you used the same wheel to spin inside and train outside.  I went to Freshbikes of Arlington and bought one.  The KICKR is about the same price the CompuTrainer.  I already upgraded the computer system, so the ANT+ technology was easy to use (and we did not incur any extra cost on that front).  The first Wahoo KICKR was dead out of the box.   I exchanged it at Freshbikes, took it home and discovered that the second was also dead.  I called Wahoo. Their tech support was fantastic.  They diagnosed the problem as a possible sensor and wanted to replace it before sending the entire unit back to Georgia.  (The Wahoo KICKR is about 45 lbs, so moving and shipping is not the easiest.)  I received the sensor, installed it, and it worked occasionally.  I did really try and tried for several months to get this to work, but could not.  I ended up trying for a few minutes then setting it aside, sliding the CompuTrainer forward and was IMMEDIATELY back to working out. 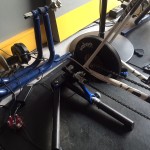 KICKR in use, but CT in stand-by.

The KICKER sat in the BTC collecting dust.  Technical support called me to follow up and was surprised to learn that I just gave up.   Wahoo immediately sent me another trainer with a pickup tag on the first.  I eagerly set that one up and it failed.  Technical support was johnny-on-the-spot again and diagnosed that there was some type of interference in the BTC which was causing the problem on the third KICKR.  They had me do a beta firmware upgrade and the problem was solved.  Two years later and it is still running without issue.  So I fibbed a little in the first paragraph, this is kind of a review.
The difference on the feel between the CT and the Wahoo?  Not much.  I will say that the KICKR feels a little more realistic and it does “coast” better than the CT due to the Wahoo being a direct mount to a cassette.   Can you take the KICKR to a race to warm-up?    Well it would be just as easy as the CT and your little Honda generator, so the actual answer is no.  If you are Team Sky, are sponsored by Wahoo, and have an RV with a generator – you are golden.  For most of us, it would not be practical.  Oh did I mention they weigh 45lbs??
In the last few months, Wahoo introduced the Fitness Snap.  From the commercial, the Snap appears to not need a cabled power source.  The athlete is pedaling along, in the middle of a room, without any cords.  We thought – finally – something to take to races!  When you go to their website it does not talk about needing 120v.  Was it possible that Wahoo Fitness figured out a way to have a rechargeable battery on the trainer so you could charge it and move it?  I guess since my lawnmower, weed eater, and leaf blower all have a 56v battery, Wahoo could too.  NOPE.  Bad assumption.  The Snap still ties you to a power outlet.  You don’t have to have a computer like the CT, but you still need 120v. 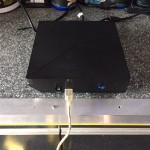 I unboxed the Snap, set it up in the BTC and nothing.  It does not work, tech support says it is probably interference.  So I am going to have to troubleshoot and find out what is going on.  Right now I am working on Zwift since they came out with a Richmond course.  My configuration this morning??  Wahoo Fitness KICKR, Alienware game box, and Zwift software.  Took me about 2 minutes to get the CompuTrainer up and running using ANT+.  I spent 2 hours getting the Wahoo KICKR to work.  I had to go to BestBuy and get a 6.5 foot USB extension cable to drag the Suunto ministick almost beside the KICKR to pick up the signal.  But after that was done I had a great hour long spin.I know I said the KICKR was working without issue for the last two years but I bought the Alienware gaming system so we could run two sessions of Zwift at the same time.  They did not develop a multiplayer version so I have to have multiple systems.  I was trying the KICKR on the new system. 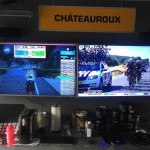 What does all of this mean?  The CT is a tried system that I can get to work immediately.  One CT is seven years, another is 4 years and the other two are about 3 years. I have a spare in case one of them needs to be repaired (Side note:  a friend of mine has a CT from their first year in business….and it still works).   I have only replaced one load generator the entire time.  Wahoo Fitness, if it works, it works great, but … it doesn’t always work.
We continue to spin with the mixture of CTs and the one KICKR.  Since we have people spin in our garage, the CT is more convenient since the ease of entry/exit for the bike is faster and does not leave one with grease on the hand from removing a rear wheel with a dirty chain.  We also know that the CT is more likely to work.

Last night we were able to get the Wahoo KICKR and Wahoo SNAP both working.  We had the KICKR going through our main system and the SNAP through the Alienware gaming system.  I am assuming that getting the extra long USB extension cable and stretching in over to the Snap decreased the interference.

Next tech idea to work on?
Zwift / PerfPro / CT / Wahoo all working in harmony. 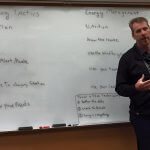 Coach: Is hiring a coach a good decision?Discussions, Training 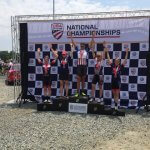