When Math is Simple but not Easy

According to the Center for Disease Control and Prevention, in 2013, more than 60% of adults aged 18 and older in the United States were either obese or overweight. That same year, Americans spent more than $60 billion annually trying to lose weight.[1] Strange diet and exercise ads litter the internet and television, promising a “magic bullet”, allowing one to lose weight with only three easy payments of $29.95 plus shipping and handling.

At the end of the day, weight loss is a simple math problem. If the following inequality holds, one will lose weight:

Calories In < Calories Out

My selection of the adjective simple is deliberate. I overheard someone at training camp snidely commenting on a statement from one of the nutrition lectures (from Lori Nedescu). “She said it was easy. It is not.” This snarl comes from the misuse of adjectives – simple and easy are not the same. The nutritionist referred to the math equation and the athlete to the difficulty adhering 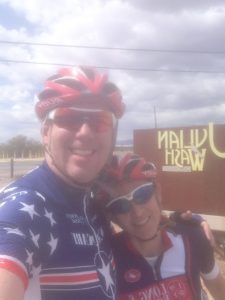 Chuck in March of 2015 to the constraints of that equation. The math is simple. Implementing the equation is not easy.

In March 2015, my husband weighed 212 pounds at training camp. As a cyclist concerned about watts per kilogram and married to another cyclist who likes to do hilly road races, he announced his intention to reach 175 pounds by September when he toes the line at U.S. Masters Nationals. He has made similar statements in the almost four years we have been together. He achieved short-lived success by implementing some draconian diet plan, but the results did not stick.

This time it is different. Why?

For the first time, he tuned out the “bright shiny thing” diet books or plans and focused on both sides of the equation, both of which required a great deal of lifestyle change.

Calories – out: With his military job and time spent on Kylecoaching and cycling team responsibilities, training was at the bottom of the list in terms of importance. In his desire to make USMES a success, his training (and mine) suffered greatly. However, he knew this needed to change. In my opinion, his calorie-out success comes from three items:

1. Accountability: He hired Damian Ruse (SPC Coaching) as his coach and uploaded his files daily.

2. Priority: When we would arrive home after work, we immediately hopped on the bike before he would check email or social media.

3. Variety: He hates the gym. I stated my desire to return to my weight-lifting regime and he said he would go with me. I have heard that before. This time he actually goes…complaining….but he is there with me.

Calories – in: The food side of the house is always the hardest. Chuck’s calorie-in achievements come from these three concepts or actions:

1. Signaling: A friend of mine who is a personal trainer who I greatly respect once commented to me that his clients who struggled to lose weight needed to learn to be hungry. We eat for some many reasons beyond fueling our bodies for the rigors of life. Chuck learned to be hungry…that his desire for food X wasn’t because his body needed it but because he wanted it. He learned to say no.

2. Data: Using a diet tracking app on his phone (myfitnesspal), he logged everything that he ate before he ate it. Since this app is on-line, his food entries are there for all to see.

3. Exclusion: Chuck, as many do, loves comfort foods and food variety and we all have many food buttons from our experiences in childhood and beyond. In order to maintain race weight and health, certain restaurants are no longer frequented by our household. Period. No more 5 Guys, la Madeleine, and other places I would rather not admit I have frequented.

Above all, Chuck benefited from the advice of a subject matter expert on nutrition, Dr. James Weinstein. In the beginning, Chuck went a little crazy with the calorie counting. (and little is used loosely – completely might be better). Jim guided him from “Eating under 1000 calories/day is my goal” strategy to one which is sustainable for both the athlete and those who love him.

As of the beginning of June, Chuck weighs 186 pounds and his race results show great improvement AND the completion of the mother of all hilly road races….Tour of Tucker County. He is healthier and no longer eats my chocolate. We no longer disagree about riding after work or on the weekend when not racing. Now if I can only convince him that getting a dog somehow is part of this process…..#lovehomerweinstein.